"Stop the Bleed" in Action! 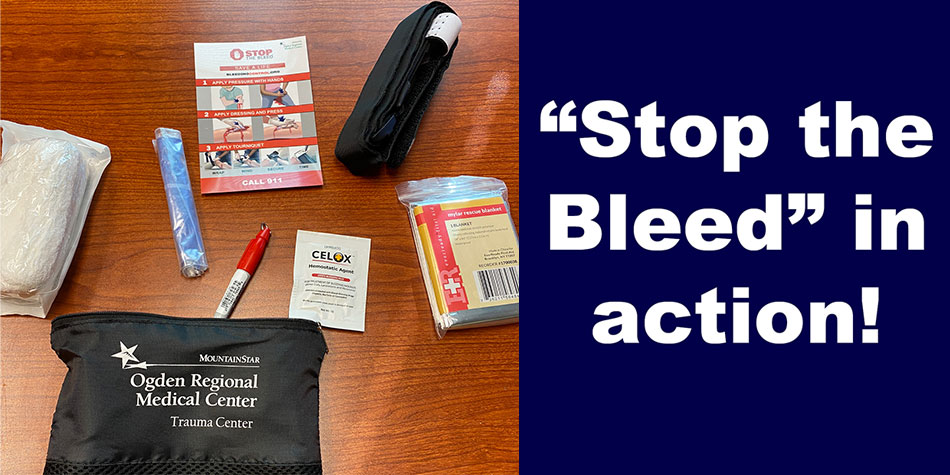 On an early summer morning, Craig Bielik was driving to a spot in the hills about 10 miles away from his home in Ogden, Utah for a mountain bike ride. Craig has been the Hospital Communications Director for Ogden Regional Medical Center for a little more than 14 years.

Driving down a slight hill he came upon a two–vehicle car accident – just minutes after it had happened. “At first I couldn't believe my eyes. It was so early in the morning and I rarely even see cars on that road at that time, but there they were: smashed to pieces, at the side of the road, engines smoking. Glass, plastic and metal were just strewn everywhere.” Said Craig.

Near the wreck, a woman, out for a walk with her dog, was on her cell phone with local 911 dispatch. She asked Craig to check on one of the two vehicles while she talked with first responders and tended to the occupant of the other vehicle.

“I had a hard time seeing inside. The air bag and side curtain in the van had deployed and I could not get the driver's door open because it was so mangled. But I looked through a small space in the windshield and I could see a woman in the driver's seat with blood running down her face.” Craig continues, “It caused a bit of panic in me at first, but then I somehow remembered that I had my “Stop the Bleed" kit in my truck.”

That “Stop the Bleed” kit was an employee gift from his hospital to celebrate National Hospital Week a few years prior as part of nationwide campaign to empower individuals to act quickly and save lives. Trauma experts have long known that no matter how rapid the arrival of professional emergency responders, bystanders will always be first on the scene when someone is bleeding. A person who is bleeding can die from blood loss within 5 minutes, therefore it is important to quickly stop the blood loss.

The Trauma Team at Ogden Regional created the kit and conducted formal education with hands-on practice using the kits with all physicians, administrators and employees. Ogden Regional Medical Center is northern Utah's longest standing accredited Trauma Center. “Stop the Bleed” training is part of the hospital's certification requirements to maintain national Trauma Center designation. Their goal was to reach every person in the facility so they could help “SAVE A LIFE”.

At the accident Craig recalled his “Stop the Bleed” training. “I was able to get into the van through the passenger side. The woman seemed ok, she was alert and answering my questions, but she was very shook up and had a nasty gash about the size of my finger on her head. After grabbing my kit from the truck I began pressing a thick gauze pad to the wound and I held it there for about 5 minutes until the paramedics arrived.”

Miraculously, the woman was not seriously injured beyond a few bruised ribs and the head wound. She recovered quickly. Craig was able to visit with her in the hospital and her medical caregivers thanked and praised Craig for his action. It's hard to know if what he did saved her life, but it certainly helped prevent further bleeding.

If you would like to learn how you could potentially save a life visit www.bleedingcontrol.org.

August 14, 2020 by Lisa Waddle
In a school year unlike any other, back-to-school means virtual learning for many children. Along with the increased screen time comes an increased...
Previous Post

Has COVID-19 affected your mental health?

August 11, 2020
The COVID-19 pandemic has caused a lot of stress and anxiety for many people, negatively affected people’s mental health, especially for people...
Next Post