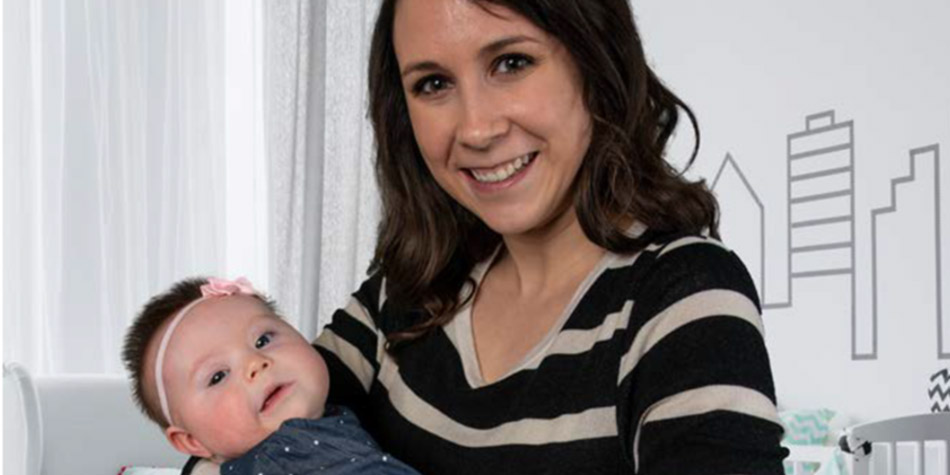 When Stephanie Hawkins found out she was pregnant again, she felt elated! But anxiety simultaneously rushed in when she remembered how extremely sick she was during her first pregnancy. The feeling of nausea and the constant vomiting were made worse by her obstetrician at the time, who acted as if she was faking the sickness.

During her initial appointment with Dr. Nathan Bertoldo, Stephanie explained her concerns, and he immediately made her feel better. He listened and empathized. Right away, she could tell this pregnancy would be a different — and much improved — experience.

“He showed concern about how I was feeling and immediately created a treatment plan that he was positive would help me,” Stephanie recalled. “I felt validated; he truly cared about me.”

Birth plan made a difference, too

Dr. Bertoldo also cared about Stephanie’s plans for the birth of her second baby. She knew what she wanted during the childbirth experience, and he supported her plans. Given that she was delivering her baby at Cache Valley Hospital, she created a birth plan on its website.

An important part of her personalized birth plan was an epidural during labor. Stephanie’s contractions began right on time — the baby’s due date was October 31. By the time she arrived at the Cache Valley Hospital Women’s Center, her cervix was dilated to a seven.

Stephanie immediately asked the labor and delivery nurses for an epidural, and they acted fast. She was soon settled into a spacious birthing suite, made much more comfortable thanks to an epidural. Stephanie was impressed by how much they cared about her childbirth preferences — and the pain she was experiencing.

“I’m always impressed with nurses; they do so much during childbirth,” said Stephanie. “The nurses at Cache Valley Hospital were friendly, personable and supportive. I felt like I’d known them for a while!”

Caring support during a scary time

Stephanie’s second daughter, Rylee Hawkins, made her debut on Halloween. The team of nurses who helped welcome the newborn into the world stayed close to mom and baby as that precious time turned scary. The delivery nurses and pediatrician had some concerns about Rylee’s health. They ordered some diagnostic tests, including one that indicated a potential issue with the infant’s heart.

“The pediatrician and a different nurse came to tell me that Rylee did not pass the heart test,” Stephanie recalled. “They also gently told me that my baby may have Down syndrome.” The pediatric nurse stayed with Stephanie and her husband for a while to explain the condition. She provided information the new parents desperately wanted and patiently answered their questions.

“She explained things multiple times!” noted Stephanie. “She helped me understand the heart test and the results, as well as features in Rylee’s face that could indicate Down syndrome.” Dr. Bertoldo also helped Stephanie cope with the unexpected and troubling concerns about her baby. He compassionately expressed hope for Rylee’s future.

“He was very optimistic,” she recalled. “Dr. Bertoldo made it clear that even if Rylee had Down syndrome, things weren’t as scary as they seemed.”

Stephanie and Rylee remained in the hospital for three days, while multiple tests and up-and-down results took place. The newborn stayed at the hospital with her parents while a technician conducted an echocardiogram to confirm whether she had a heart condition. A heart specialist in Denver evaluated the images via telemedicine, and it revealed great news. Rylee’s heart was fine!

“My husband and I started crying and so did the nurses!” Stephanie said. “We were grateful for the technology at the hospital that quickly let us know Rylee did not have a heart condition.”

Today, Stephanie praises the nurses who were supportive, optimistic and willing to do anything for her.

“I connected with the nurses,” recalled Stephanie. “They bent over backwards but were not overbearing, and that made a scary time much easier. It felt like I was their only patient, and the three of us were the No. 1 priority!”

To learn more about the services at Cache Valley Hospital, visit our online Services section or call (435) 713-1371.

Wrapped in a warm blanket

October 2, 2019
"No matter what happened, I would have had peace because of what happened in the first few hours." This mother of two had received the phone ...
Next Post