Man and dog: healing and hopeful, with close-to-home care. 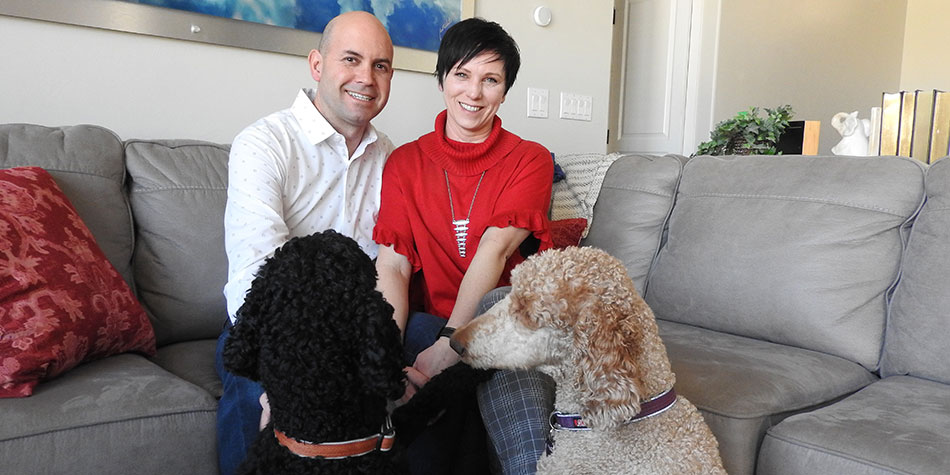 Mike Anaya and his fiancé, Brittany, sat at the kitchen table eating breakfast when a burst of intense yelping, whining and screaming noises erupted from the backyard.

“That’s our dog! That’s Tawny!” cried one of their combined seven children.

Mike and Brittany rushed outside to find Tawny, a six-year-old standard poodle, frantic and in obvious pain.

“At first it looked like her paw was stuck under the fence,” Mike recalled. “She was going crazy!”

Peering over the fence, Brittany discovered the actual, awful, situation: the neighbor’s husky gripped Tawny’s paw in its teeth and was struggling to pull Tawny by the leg to the other side of the fence.

“We started yelling, throwing things and banging on the fence. We tried everything to get the neighbor’s dog to let go of Tawny, but it just wouldn’t let go,” Mike said.

That’s when Mike took the matter into his own hands, literally. He bent down and reached into the fence opening.

“I was trying to get her free; but looking back, I should have thought this through better,” Mike admitted.

As the husky released Tawny from its jaws, it bit into Mike’s forearm and then clamped down on his pinky finger. Plus, in the dramatic disarray, somehow Tawny bit Mike’s leg before running and limping away.

“I’m not sure how I got my hand out of there, but when I did, I first noticed my pinky. When you get a dog bite, it tears the flesh – it’s not a clean cut like a knife,” Mike said. “But you know when you can see cut in the flesh but it’s not bleeding yet? That’s what was happening. I knew I was hurt, but I didn’t think it was that big of a deal.”

With injured Tawny at the forefront of their minds, Brittany and Mike loaded the dog into the car and zoomed toward the vet. Once Tawny was admitted for care, they realized the severity of Mike’s gushing wounds.

“I had blood all over me, and by this time I was hurting,” Mike remembered. “Thankfully, Pleasant View Emergency Center is only a couple minutes from our house, so we headed there.”

“We met the security guard at the Emergency Room’s front door, and then they immediately took me back and started cleaning me up and taking care of me,” Mike said. “We didn’t have to wait at all.”

Mike needed seven stitches in his left pinky finger, four stitches in his right forearm and disinfecting of his leg’s puncture wounds. Thankfully, the Emergency Room team members created as pleasant of an experience as possible.

“Sometimes you’re having a procedure done and the silence is almost the worst thing,” Mike said. “But there we were in the ER, and under the circumstances, we joked and laughed through the whole thing. They took their time and were so good about making sure both Brittany and I were ok.”

At Pleasant View Emergency Center, physicians and nurses strive to provide personalized care – physically and emotionally. Laughter proved to be a happy and helpful medicine for Mike, but interestingly, during a previous experience at Pleasant View ER, Brittany’s daughter received customized compassion using a different method.

“The security guard brought her a stuffed animal. That stuffed toy made all the difference in the world … Brittany said you could literally see the stress go away from her daughter’s body. That’s the thing, in this ER they don’t just take care of the wound or what’s hurting you – they also give support and compassion,” Mike said.

Man and dog: healing and hopeful, with close-to-home care. Thankfully, both Mike and Tawny have recuperated and healed after the dog fight. Though Tawny needed 8 stitches to her paw, she’s running and tail wagging again. To keep her safe, Mike even added a layer of protective reinforcement to the fence that separates Tawny and the husky; and authorities are investigating an animal control report regarding the incident.

Most of all, Mike says he’s thankful to have quick access to emergency care in times of need.

“There’s a peace of mind knowing that the ER is right there,” Mike said. “They give great care and I hope all the members of our community are aware of what they have in their backyard.”

Heart attack symptoms can show up differently for men and women. Learn how to recognize a heart attack when it happens.