Nathan Barton, 40, set down the barbell and picked up heavy dumbbells. He pumped two sets of chest presses and then sat up. Something didn't feel right. His chest began constricting, and the tightness pulled more menacingly than anything he had experienced in the past.

"I've had little bouts of supraventricular tachycardia (an abnormally fast heart rate), and I initially wondered if it had anything to do with that," Nathan said. "But this felt different. All of it was different. Nothing was similar except the tightness in my throat and neck, but the pain I was feeling in my chest grew substantially worse."

Nathan drove himself home to his wife, Brittney, and quickly determined he needed to get to the hospital.

An Emergency team to trust

Nathan and Brittney live about 7 minutes from St. Mark's Hospital. Upon arrival, the Emergency Room team jumped into action.

"Because he had symptoms of a heart attack, they took his blood pressure, heart rate and oxygen while we were still in the lobby of the ER," Brittney recalled. "At first they were a little stumped because his vitals were normal. Then, a blood test showed elevated blood proteins, so they thought maybe a blood clot."

The emergency physician closely examined Nathan's test results and symptoms and determined that they didn't line up completely. He ordered a CT scan for further imaging, and based on Nathan's family history of heart disease, he wanted the CT scan completed stat!

When they wheeled Nate back in from the CT scan, he was wheeled in with a trauma team at his side," Brittney remembered. "They said, 'Something is incredibly dangerous and wrong.' They told me Nate needed to be moved to a trauma room and he'd be prepped for emergency surgery. The doctor walked in right behind the trauma team to explain it all."

The emergency physician diagnosed Nate with an aortic dissection, meaning Nate suffered from a tear in the inner layer of the large blood vessel branching off the heart. With such a tear, blood can flow between the layers of the blood vessel wall. The condition is life-threatening, and about 20 percent of patients with aortic dissection die before ever reaching the hospital.

"The doctor told us that if he made it through the surgical preparation period, Nate would most likely not make it through surgery. The rate of survival was minimal … later we found out the survival rate for his severity was about 5 percent," Brittney said.

Nathan survived the surgical prep time. The trauma team wheeled him into an operating room where Dr. David Affleck, thoracic and cardiac surgeon, would perform a complex, high-risk, open-heart attempt to repair the aortic tear using a synthetic graft.

Meanwhile, friends and family arrived at St. Mark's to support Brittney and await the results.

"We got updates every hour from the nurse in the Operating Room, letting us know how he was doing. The way the nurse approached me felt positive and calming. He was making it through," Brittney said. "When they were finally closing him up, we decided we could breathe. We had a little party right there in the waiting room. We were still scared, but it was a positive vibe."

Nathan had endured a dangerous 9-hour open-heart surgery and has a 14-inch incision from collar bone to belly button to prove it. But Nathan still faced critical health issues. He wasn't in the clear yet.

From miracle patient to stroke patient

Nathan spent most of the next week in the Intensive Care Unit (ICU), being closely monitored.

"We had two amazing veteran ICU nurses who were so on top of it," Brittney remembers. "They were in his room the whole time and never left his side."

Nathan needed attentive care during every step of his recovery.

"It's the strangest thing to come out of surgery not knowing you went into it," Nathan said. "When I woke up from this, I wasn't like myself when I came in on Saturday night. I don't think I even appreciated people in my hospital room until maybe Tuesday. Then, for the course of the next 36 hours I started to improve dramatically - suddenly I was everybody's miracle patient."

During Nathan's dramatic improvement he could get out of bed and walk around ICU. Unfortunately, that didn't last long.

"I lost my ability to string together conscious thought and I was deteriorating. I was bed ridden. I got so sick and couldn't figure out why," Nathan said.

The medical team modified Nathan's blood pressure medication and that seemed to help. But then the next day, Nathan fainted while attempting to get up to use the restroom. A blood clot was to blame. Nathan had suffered a stroke.

"The biggest scare here is that this went from a heart injury to a brain injury," Nathan said.

Imaging revealed two holes in Nathan's cerebellum. Blood clots had broken away from the surgical site and travelled to the brain, causing damage.

"It felt like I was a new patient again," Nathan said. "They just kept ordering more imaging. They really are amazing people. They sincerely are. I've never seen a group of people work their asses off more. I'm humbled."

In addition to his aortic dissention and two strokes, Nathan's lungs collapsed while in the hospital. As they collapsed, oxygen burst through his chest cavity and forced itself into his tissues. He needed a chest tube for several days to drain the induced fluid.

Then, Nathan's imaging exposed a suspicious spot that looked like another significant blood clot in the upper chamber of his heart. After an further procedure, called a transesophageal echocardiogram, physicians clarified that the dubious area was inflammation. That was good news.

Over the next couple days, Nathan's body stabilized considerably. He was ready to return home to his wife and three young daughters.

"I truly believe that having staff who were understanding and could see on a human level what we were going through, was one of the biggest contributors to our success. We had such a supportive team, who put in hours and hours and hours to help our family get through this," Nathan said. 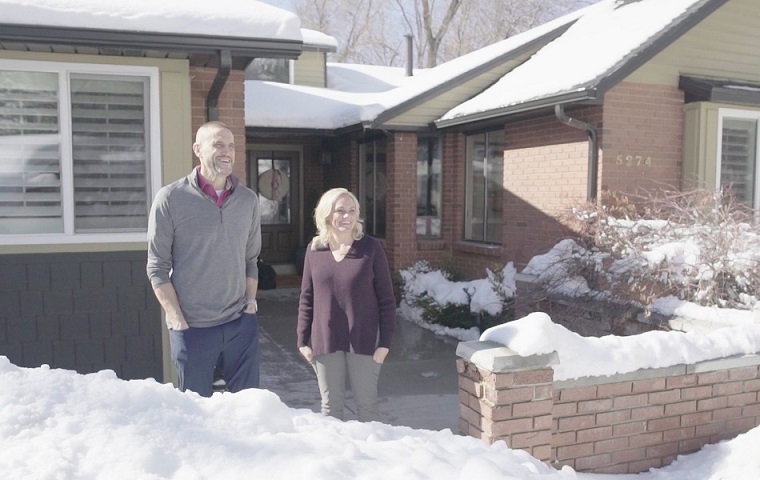 Nathan still has a substantial at-home recovery ahead of him. He says his family and faith will provide the added strength he needs.

"There's a lot of discovering yourself spiritually when something like this happens," Nathan said. "And I think you understand what type of fortitude you have, and your family has. I'm surprised at what we're capable of."