Care for the Heart, From the Heart

"I have battled with being physically inferior for most of my life," Michael Nixon, of Spanish Fork, said.

As a child, Michael's body couldn't seem to coordinate enough for regular play like roller skating, athletics or musical instruments. At 30 years old he found out why - Michael was diagnosed with muscular dystrophy. Over time, his physical challenges compounded. As muscles atrophied, he became a diabetic, his right leg was amputated below the knee, and pain became a normal part of everyday living.

Although Michael has grown accustomed to physical trials, he did not anticipate a sudden, severe heart attack last summer.

It's a heart attack, who should drive?

Michael returned from errands with zero energy. He planned to rest upstairs, but his wife beckoned him to the computer. She sat in front of the screen and he stood behind her when the attack struck.

"I felt like a sledge hammer hit me in the chest," Michael remembered. "I said to her, 'Sweetheart, I'm having a heart attack.' She looked up and said, 'Are you serious?' I replied, 'Yes. Call 911.'"

At this point Michael's wife wondered if it would be better for her to drive to the nearest hospital, but Michael insisted on an ambulance. Within 4 or 5 minutes, the Emergency Medical Services team (EMS) arrived at Michael's home, and Michael was no longer coherent. Though he doesn't remember the paramedics moving him into the ambulance or the ride to the community hospital in Payson, he recognizes that the EMS team's immediate and skilled medical care proved vital.

"I absolutely would have died if my wife had taken me in the car," Michael said. "In fact, the timing of everything that day went perfectly - everything was perfectly placed to allow me to survive this." 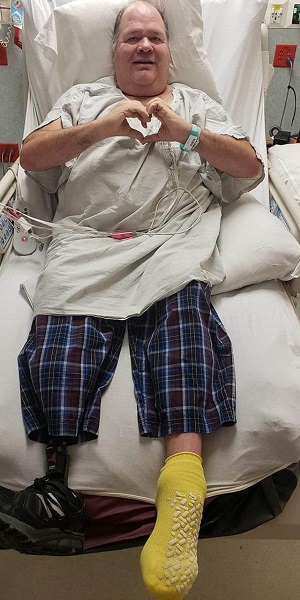 Physicians at Mountain View Hospital evaluated Michael's situation and realized the severity of the heart attack and the complexity of Michael's health required advanced care from a more advanced facility. He needed another ambulance ride; this time to St. Mark's Hospital.

"The doctors told my wife and son that I might not survive the ride to the hospital. They thought they were saying final goodbyes as they moved me to the ambulance, with its lights and sirens going," Michael said. "It actually wasn't an awful ride - despite the rush hour traffic. I wasn't scared. Two critical care nurses sat with me the entire ride. The ambulance was packed full, so I was well cared for."

Two of his major arteries had complete blockages (one being the left coronary artery, also known as the widow maker). He also had a high fever.

"I know that when the docs were reading my notes for the first time and seeing my medical history, it concerned them tremendously - I'm a big guy, a diabetic, I have muscular dystrophy and I'm an amputee. My medical history is horrible. They were deeply concerned that this was too much," Michael said.

To strengthen Michael's chances of survival, he received care in the Intensive Care Unit (ICU) for nine days. When his body finally stabilized, he underwent three surgical procedures in a three-day period.

Dr. Kent Thorne and Dr. Shreekanth Karwande, cardiac thoracic surgeons at St. Mark's Hospital, collaborated in the surgical placement of a temporary heart pump called an Impella, followed by a quadruple bypass surgery, and then the surgical removal of the Impella.

"I read somewhere that St. Mark's Hospital homes the No. 1 cardiovascular unit in the region, and I believe it's because of these two surgeons," Michael said. "They were making the decisions. Their bedside manner and surgical work was beautiful. I really believe that their decision to wait and use the Impella saved my life. I don't think I could have made it otherwise."

Serving the heart, from the heart

"The doctors got my heart function back into the normal range, which is absolutely amazing!" Michael said. "I was told that probably wouldn't happen, yet the cardiologists and surgeons were able to put me back into a position where my heart is doing what it's supposed to do. I'm thrilled about that."

Interestingly, Michael felt healing and strengthening at St. Mark's from an emotional standpoint, as well as a physical one.

"Those nurses and doctors are heroes. They stepped in when there was absolutely nothing I could do with my life, and they saved it," Michael said. "Plus, they made me feel happier while I was going through it. I will never forget the care, physical and emotional, that I received. I felt loved. I felt cared for and like I was important. If I had one message to share, it would be that. The love I received will stay with me forever." 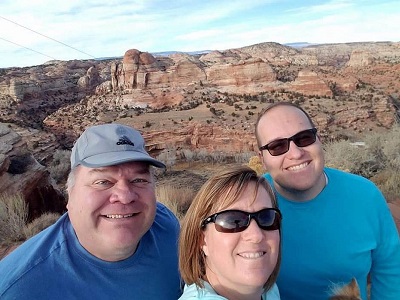 Since his heart attack, Michael has undergone diet changes, physical and cardiovascular rehabilitation therapy. He enjoys walking, woodworking and spending time with his family. He continues to manage his ongoing chronic health issues, but rests assured that his heart can serve him well through the rest of his days.

"It's a miracle. I have lots of other physical problems, but my heart is not a problem now. It will go and go and go, and it will give me everything I need. I'm so grateful for that. I'm so thankful for the physicians, nurses and skilled staff that helped me," Michael said.

Not Your Mother's Hysterectomy

March 28, 2019
When Nate Barton felt severe tightness in his chest, he and his wife turned to the team at St. Mark's, which proved to be a life-saving decision...
Next Post