Back in Action Thanks to Robotic-Assisted Spine Surgery

Running to a halt

Physically active is an understatement when it comes to describing Monty Andus, 66, of Cottonwood Heights. He's run 15 marathons, competed in racquetball for 20 years, played basketball for more than 40 years and labels himself an avid golfer. Basically, it takes a mountainous storm to slow him down. Unfortunately, his storm arrived in the form of sciatic nerve pain.

"It's debilitating, limiting and excruciating," Monty remembered. "When I turned just right, it would almost knock me to the ground because of the pain - and the pain just kept getting worse as time went on."

Monty's sciatic nerve pain shot down his back, proceeded down his leg and continued into his foot. He knew he needed help, and sought out Dr. Kade Huntsman, orthopedic surgeon based at the Utah Institute for Robotics Surgery at St. Mark's Hospital and Salt Lake Orthopedic Clinic.

Dr. Kade Huntsman explained vertebrae discs collapsing in a highly vulnerable of the lower spine and severe stenosis, or narrowing, caused Monty's pain. The stenosis and collapse discs most likely came from a combination of genetics and overuse.

"The first one helped for about a month, and I needed to wait three or four months before I could have another injection. The second one last only about two weeks and then the symptoms returned," Monty said.

Monty had experienced the progressive, serious pain for about 2 years when he went with his wife on a vacation to Hawaii; and the trip decisively tipped the scales toward surgery.

"On the trip, I had a hard time walking more than 100 yards before I had to sit down due to the pain," Monty said. "It was miserable. I couldn't keep going on like this. So, when I got back home, I decided it was time to schedule the surgery."

To prepare for surgery, Monty dedicated himself to getting as physically strong as possible. For two months, he exercised, stretched, ate healthy foods and prepared his body for the big day.

Monty's surgery took place at the Utah Institute for Robotics Surgery at St. Mark's Hospital. First, Dr. Huntsman and team created an incision from below the belly button to the pubic area, in order to remove the decompressed vertebrae, and replaced them with two artificial titanium discs. After Dr. Huntsman completed this stage of the surgery, Monty's initial incision was closed.

The next surgical steps utilized the latest most advanced surgical platform, a minimally-invasive robot-assisted system. The technology includes high-resolution cameras for superior vision, and micro-surgical instruments which scale and translate the surgeon's exact movements seamlessly. The surgeon remains the chief mastermind during surgery, while the robot enhances visualization and provides consistent, minute movements. Together, the surgeon and robotic surgical system ensure that each procedure is performed as precisely as possible.

With only two small incisions on Monty's back, each being less than 2 inches long, Dr. Huntsman used the robot-assisted technology to place 12 screws and two rods with absolute exactness. These new additions now hold together Monty's lower spine.

"What was so impressive to me is that this robot had an MRI, X-ray and CT scan of mine loaded into it, so when directing the angle of the screws, it used my specific anatomy. It's personal to my body!" Monty said. "I was so excited and impressed with the whole idea of how the robot positioned everything. I was even more comfortable with that than Dr. Huntsman free-handing everything. Plus, since it was minimally invasive from the back, I didn't have to recover from cutting major muscles to put in the screws." 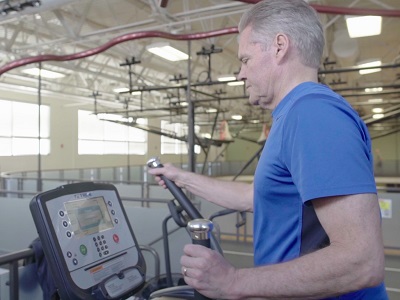 Benefits of the robot-assisted surgery include:

"It could not have been better," Monty said of his surgical experience. "Dr. Huntsman and team were absolutely fantastic. The nurses at the hospital were responsive and attentive. I was well taken care of."

Monty underwent his robot-assisted spine surgery in the morning and took his first walk down the hallway (with the aid of a physical therapist) that afternoon.

During his four-day hospital stay at St. Mark's, he had occupational and physical therapy sessions daily. 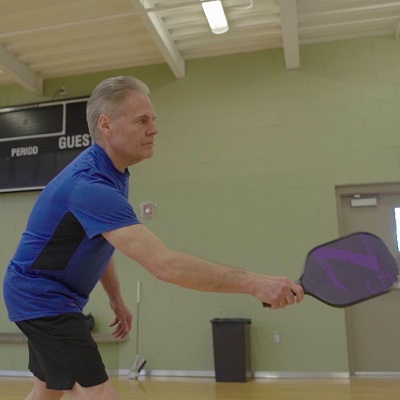 Once home, Monty underwent physical therapy twice weekly for two months. Step by step, Monty progressed from exercises while laying down, to walking short distances, to walking a 15-minute interval.

"I'm playing pickleball (which is popular with old guys like me) and I do the elliptical, ride the bike and lift weights. I work out about 2 hours a day, shovel snow and golf two or three times per week," Monty said.

Thanks to spine surgery, Monty moves freely, fervently and without pain!

5 equipment essentials for a home gym