May 20 marks one year since Brigham City Community Hospital started offering minimally invasive robotic surgeries, and in that time the hospital has successfully completed more than 200 surgeries with this state-of-the-art technology.

Robotic surgery is accomplished using mechanical arms that hold surgical instruments and a camera that are controlled by a surgeon. One of the key benefits of robotic-assisted surgery is that it reduces the need for large incisions, leading to less scaring and must faster recovery times.

Another major advantage is that robotic surgeries typically require less medication, both while patients are in the hospital and after they go home. Because these surgeries are less invasive, patients usually recover with very little pain.

What surgeries can be done robotically?

Nearly any surgery can be done robotically. Over the past year that Brigham City Community Hospital has been doing robotic surgeries, about 44% have been for gallbladder, 32% for hernia, and 13% for hysterectomies and other gynecological surgeries. Other robotic surgeries have included abdomen, appendix, colorectal, upper GI, hiatal hernias, and anti-reflux surgeries.

“Robotic surgeries have excellent outcomes. In the 200+ we’ve done this past year, our patients have done very well, said Dr. Wride.”

One of those surgeries was performed on Larry Bailey who had a very large precancerous colon polyp that was too big to be removed by colonoscopy.

“When we learned about his polyps, we thought, ‘There’s nothing to be done, it’ll have to take its course and that’s it,’” said Larry’s wife, Mary. “But when we went to see Dr. Wride, he already had a plan and said he could take care of it laparoscopically. I didn’t think that was possible…. It was more than we ever hoped for! They removed a third of his colon – that’s a big deal … and yet it was just one night in the hospital, and he didn’t even need pain medicine.” 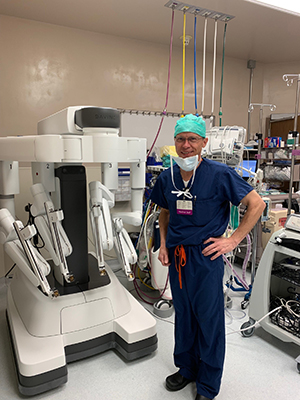 Another patient, Kenna Higley, had colon cancer. Dr. Derrick Walker, general surgeon at Brigham City Community Hospital, used an advanced surgical system to make six small abdominal incisions. He then removed 1.5 feet of her colon to remove the cancer. “I never did see the robot, and I don’t remember anything about the surgery at all,… but one doctor told me I came through it like a 20-year-old,” said Kenna, a nearly 82-year-old.

Dr. Wride said he is grateful that Brigham City Community Hospital is on the cutting edge of surgical technology, which allows him to have more tools at his disposal to be a better surgeon.

Speaking about the hospital’s investment in this technology and equipment, Brigham City Community Hospital’s CEO Richard Spuhler said “we are thrilled with the success we’ve seen with robotic surgeries over the past year because of what that has meant for our patients, and what it will mean for so many others in the future. Providing robotic surgeries allows us to serve more people in our community without them needing to travel far away for this advanced type of medical care.”